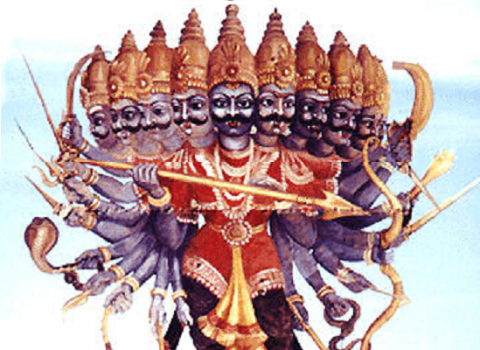 Behold! The gentle touch of dying breath is now upon the gods!

That said, their many heads ensure at least one still lives on prolong'd.

With recourse yet no further will they stay, but they, against the odds,

Will choose instead to make their bed descending to the humans throng'd.

His Lakșmi, wife and god of nearly nothing, dwells in Sita's worth.

They both abandoned life among the clouds where every glad soul soar'th.

To live as mortals bound by lifetimes' strain, to counter devils' mirth.

What devil dares to deign that gods should be brought bottomward by swarth?

It only carries cador from the scholar taught by Vișņu's dearth.

He had enhanced his chances by the adamance in going forth,

His plan towards its enaction and compaction snagged by each their birth.

As tales of heinous evils couched with other propaganda spread,

And other such foul lies toward this great doctor and his cause, he fled;

His research paid him no more favours in their eyes than gods' reprise.

However, this is not how it needs end, as this man knows his stead:

Of his oppressors chosen forms, for those that they may once have led

Shall see the truth of their manipulation, thus to buck their lies.

Before the still-cosplaying god did bring the mount to battle's end,

The crafty Ravana pursued him there to bring his victory,

And there, amongst the snow and all the frozen ice, he him did rend

Releasing him again to immortality, he cannot flee.

Then all three Brahman elements do fall; no more gods rule our world.

Humanity shall make its own damn destiny; roll falgs unfurled!

Poetry Slam:
Once Upon a Poem Scholarship Slam - CLOSED
This poem is about:
My community
Our world
Poetry Terms Demonstrated:
Synecdoche