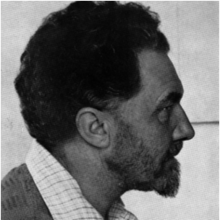 Ezra Pound was born in Hailey, Idaho, on October 30, 1885. Pound completed two years of college at the University of Pennsylvania and earned a degree from Hamilton College in 1905. After teaching at Wabash College for two years, he travelled abroad to Spain, Italy, and London, where, as the literary executor of the scholar Ernest Fenellosa, he became interested in Japanese and Chinese poetry. He married Dorothy Shakespear in 1914 and became London editor of the Little Review in 1917. In 1924, Pound moved to Italy and became involved in Fascist politics, and did not return to the United States until 1945, when he was arrested on charges of treason. In 1946, he was acquitted, but declared mentally ill and committed to St. Elizabeths Hospital in Washington, D.C.

When matched to Ezra Pound, it means that similarities have been found between your poetic style and the themes and literary techniques typically seen in works by this famous poet. For example, you might use metaphor and strong imagery the same way that Pound does. Recognizing these similarities is important because it gives you information about the history of your poetic style, which poets might inspire you, and what writing techniques you should try next.

Try using alliteration and symbolism more often. You might also like experimenting with writing using techniques from Japanese poetry such as writing haikus.